"Old Florida" was disappearing by the minute. Architecturally significant buildings were constantly being razed to make room for this extravaganza mall, or that glitzy high rise condo project. Thankfully, local, state, and even the federal government finally grasped the concept that a lot of this stuff needed to be protected and preserved.

The National Historical Preservation Act was legislated in 1966, creating The National Register of Historic Places. Among other things, it offered tax credits to developers who restored historic properties. They are required to follow strict guidelines for renovation, and after certification, can obtain the National Register designation. In some places, entire neighborhoods could qualify as Historic Districts, thereby placing all the properties therein under permanent protection. Miami Beach's Art Deco District and Boston's Back Bay and Beacon Hill are prime examples of such places, distributed all over the USA. And yes, while many people- myself included- have a problem with the government telling us what we can or cannot do with our own properties, we also realize that people cannot always be trusted to respect these treasures. They can build all the new high rises they want, but antique building gems can no longer be reproduced in a cost effective manner. If, for example, a building is destroyed by fire, or structural failure, in a Historic District, it must be replaced exactly as it appeared, despite employing modern engineering methods. Since such areas, or buildings, can no longer be reproduced, their market values are also protected.

Heading directly across Florida from Fernandina and St. Augustine, one arrives at the sleepy fishing town of Apalachicola. It may be only 60 miles from Panama City, but seems to be 150 years back in time. With a population of less than 2,500, Apalachicola's Historic District includes over 900 buildings! Sitting at the mouth of the river and bay that bear its name, it is a part of the so called "forgotten coast." When compared with Florida's major cities, this little town could well be on another planet. It is authentic, not an amusement park rendition of an older time. The mad rush to Florida has somehow bypassed a few out of the way places, and this is one of them. Apalachicola's is a seafood based economy, and visitors are delighted with the impeccably fresh fare offered by the many local restaurants. It is well worth a walk down to the docks to check out the commercial fishing fleet, where one may occasionally be able to purchase fresh crabs and fish from one of the captains. Don't take out a credit card; cash- not cotton- is king. There are a number of excellent museums in period structures, such as the Raney House, where the guides, who are often the owners, are steeped in local history, and more than willing to give you all the education you desire. The Apalachicola National Forest is about a half million acres of diverse topography, with hiking trails leading to huge sinkholes and freshwater lakes and limestone springs. Like so many places in Florida, the bird life there is spectacular.

Although I admit to not having seen each and every bird watching mecca in the United States, I have yet to find any state that rivals Florida in its diversity and numbers of birds. From a very dark past, where market and plume hunters slaughtered millions of birds for their meat, and feathers for ladies' hats, Florida's bid populations, under long overdue protection, have made a spectacular comeback. Also aided by the removal of DDT use as an insecticide, Bald Eagles and other large birds were literally snatched from the brink of extinction. DDT weakened their eggshells, so the majority of eggs were unwittingly squashed in the nests by the brooding parents. In 1963, there were only 417 nesting pairs of Bald Eagles in the lower 48 states, including Florida. In 2021, The Cornell Laboratory of Ornithology's study finds 71,400 nesting pairs and a total of 316,000 individuals. Now, there is a wildly successful conservation effort!

Bird watching in Florida brings all sorts of people, including "birders" and "bird watchers." "Birders" are those primarily interested in adding as many species to their life list as possible. The movie "The Big Year," with Owen Wilson, offered a good look into the lives of birders, and the extremes to which some of them will go to record rare species. "Bird watchers," myself included, are more interested in observing bird behavior than in compiling lists of what they have seen. It is easy to spot the types. The birders will record what birds they see, and move on. The bird watchers may stay in one spot for hours, observing the antics of whatever birds happen to be there. Whether it's a regal Roseate Spoonbill probing for crustaceans in the shallows, or a Robin tipping over on its back while yanking out a worm, it's all fascinating to us. The more time one spends watching birds, the more likely one is to experience what I call a "nature show."

While driving through the Everglades near Flamingo late one night, I saw a large bird fly across the road and swoop down on something in the grass on the shoulder. I pulled over to get a better look, and the bird was obviously fighting something, wings flapping away. It turned out to be a Great Horned Owl trying to kill a large Bull Snake, which had wrapped itself around the owl. This went on for what seemed like a long time, but was really about five minutes, until the owl grabbed the snake's head with its beak and finished it off. At this point, I was about 10 feet away from the exhausted owl, who stood there panting with wings drooping. It couldn't care less about my presence. After resting, the owl probably started to be concerned about me trying to steal its impressive prize, so it took off with the snake dangling from its talons, to a nearby tree, where it proceeded to dine. That Bull Snake was at least four feet long.

Such spectacles are not uncommon to see in Florida's nature preserves. As I said, the more time one spends watching, the more likely one is to experience something really uncommon. 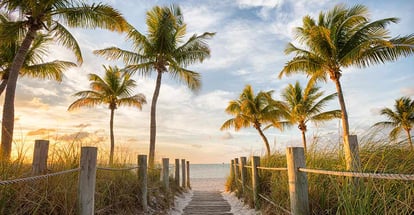 In Florida Seasons, Sunlight is longer in Winter and Shorter in Summer 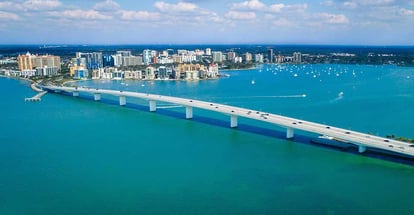 Benefits of Living in Florida

How to Officially Become a Florida Resident