The United States Department of Veterans Affairs (VA) offers veterans, service members, and their surviving spouses the opportunity to purchase homes without needing a down payment or private mortgage insurance (PMI).

VA mortgage loans are guaranteed by the Federal government and provide the lender with additional financial security in the event of loan default.

As an active service member or veteran of the U.S. military, you may be eligible to participate in the VA's unique home loan program. If you're planning to take advantage of VA loan benefits, you should learn about the eligibility requirements and entitlements. This post will discuss everything you need to know before applying to get approved by the lender and avoid problems later down the road. Read on to learn more.

VA loans are available to eligible veterans, service members, or surviving spouses. However, your eligibility for a VA loan is dependent on several factors, including your service dates, discharge type, and whether you're receiving VA disability compensation. Here's what it takes to qualify for a VA loan:

To qualify for VA loan benefits, you must have served at least 90 days of active duty during wartime. The below wars/conflicts are qualified:

To be eligible for VA loan benefits, you must have served on active duty during peacetime. You're considered an eligible peacetime veteran if you served during:

A veteran must meet specific minimum VA requirements to be eligible for a VA home loan. First, they must have served in active military service during wartime for at least 90 days, or at least 181 successive days during peacetime. Their discharge must also be under honorable conditions.

Veterans and current Reserves and National Guard members are eligible for VA home loans if they've served for 90 consecutive days. A Reserve or Guard veteran may qualify for a VA loan if they've got six years of active service.

Reservists, National Guard members, and veterans who served on active duty from the Gulf War era may be eligible for VA loan benefits. To qualify, they must have been released from active duty under other than dishonorable conditions at least 90 days before applying for a VA home loan. They must also live or work in a county where VA has an approved lender to make loans.

Surviving spouses of permanently and disabled veterans who died of a service-connected disability may use their eligibility. You may also be eligible for VA loans if your spouse died on active duty or from a service-caused disability, and you didn't remarry immediately after your spouse's death. However, if you remarried upon turning 57 years old after your spouse's demise and on/after December 16, 2003, you may be eligible.

The surviving spouse of a service member who's declared missing in action (MIA) or held as a prisoner of war (POW) for at least 90 days may also be eligible. In this case, you're only suitable for a one-time VA loan and exempt from paying the VA Funding Fee.

There’s a broad category of other people who might be eligible for a VA loan guaranty. These include:

While most borrowers are eligible for VA loans, a borrower's eligibility may be suspended or denied in certain circumstances. The good news is that VA offers a wide range of exceptions to prospective applicants whose military discharges were under other conditions rather than honorable. Since there are a sheer number of VA exceptions, it's in your best interest to consult a VA loan specialist.


The Certificate of Eligibility (COE)

The COE is an important document issued by your lender. It serves as proof of entitlement to VA funding. The COE is not a substitute for a Certificate of Title or registration, but rather an indication that VA has no objections to your acquiring their benefits.

This certificate is issued by a VA Regional Loan Center or a state's Veteran's Affairs Department. It documents that you served in several designated categories of service, including active duty, reserve or guard, national guard, peacetime only, wartime only. The COE also lists your dates of service and confirms your entitlement to VA-guaranteed loans based on those dates.

VA entitlement is a subject many homebuyers ask about, but they're often unsure of how it works. The rules and regulations surrounding VA loan entitlement can seem confusing to veterans, especially if they don't understand the basic ins and outs of getting a VA loan in the first place. In a nutshell, entitlement is simply a way to express how much you're allowed to borrow from your lender. Entitlement also defines how much of your VA loan benefits you can use to buy a home.

The amount you get is based on factors such as your disability rating, years of service, wartime or peacetime service, discharge conditions, among other eligibility requirements. Additionally, your entitlement status means whether or not you qualify for a full or partial zero-down payment mortgage.

A VA loan can be an excellent solution to your home-buying needs, especially if you're looking to purchase a property that costs more than the area's median price. But eligibility and entitlement are two key concepts to keep in mind before applying for a VA loan as they'll help you understand what you're getting into and make sure you're using the VA loan in the most efficient way possible. 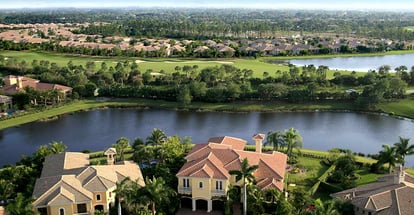 VA Loans in Escambia County, Florida: Take Advantage of the Zero Down Payment

New Homes for Sale Near Tyndall Air Force Base | Florida