How Many People are Moving to Florida Every Year?

With a subtropical climate that attracts visitors all year, Florida is a US state situated in the country's southeastern part. The temperatures in the sunshine state are always warm, and all parts of the state have proximity to the beach. Visitors are usually attracted to the golf courses, theme parks, exotic animals, and sunshine.

People from different parts of the world move to Florida every year, searching for a new life. The sunshine state recorded 329,717 new residents from April 2020 to April 2021.

Most people move to Florida due to the lower cost of living, lower property taxes, and no state income tax. But how many people are moving to Florida every year, and what are their exact motivations? Read on to learn more:

Affectionately referred to as the sunshine state, Florida experiences up to 300 days of sunshine every year. The sunshine and the fantastic natural features are why the state is home to more than 20 million people. Here are four interesting facts you should know about Florida:

The sunshine boasts over 9,200 miles of shared-use, equestrian, bicycling, and hiking trails. It also features more than 4,000 miles of trails for paddling.

With the highest number of golf courses (1,200), Florida hosts the World Golf Hall of Fame and Museum. It is also home to Kissimmee Prairie Preserve State Park, the only International Dark-Sky Association-certified state park.

Florida has the country's longest coastline that stretches 1,197 statute miles and 825 miles of easy-to-access beaches. It is the only state bordering the Gulf of Mexico and the Atlantic Ocean. You'll always be within a 60-mile radius of the nearest salty water body when living in the state.

With over 2,276 miles of tidal shoreline, 11,00 miles of rivers, and 7,700 lakes, Florida is the world's fishing and boating capital. The sunshine state has also produced the most world fishing records (900 in total) than any other US state or country.

Out of the over 700 freshwater springs in Florida, 27 are first-magnitude springs. The state is home to Cedar Key, a fishing village known for having the country's best clam chowder. It also hosts the Indian River Lagoon, the most biologically-diverse estuary in North America. 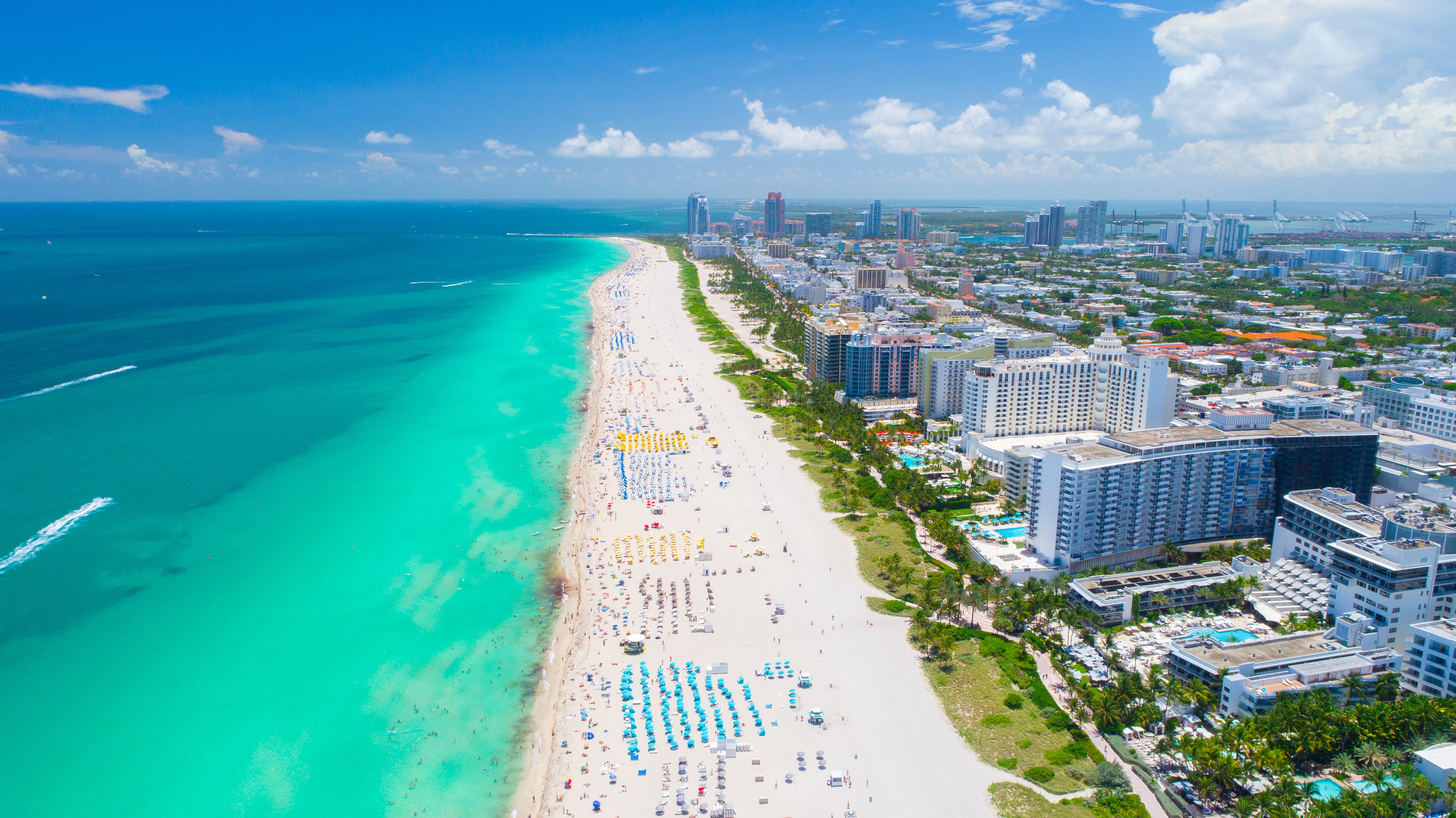 Being home to family entertainment giants like Busch Gardens, LEGOLAND, SeaWorld, Universal, and Disney, Florida is the theme park epicenter. At the state's center lies Orlando, a city that attracts more visitors every year than any other amusement/theme park destination.

The state of Florida sits on 65,755 square miles of land, with 353.4 people in every square mile. It is the country's 8th most densely populated state, with Jacksonville having the most significant city population of more than 900,000 people.

With more than 2 million residents, Miami-Dade is Florida's large county. Currently, the sunshine state is home to about 20 million people. Its yearly growth rate stands at 1.8 percent, above the country's average.

Number of People Moving to Florida Every Year

Florida ranks the number one destination for Americans looking to relocate to a new state in 2020. The ranking is based on surveys done on 700 US adults, US Census Bureau Data, and internal metrics.

The sunshine state received more visitors during the Covid period. Most people prefer moving to Florida thanks to its lower housing costs. They are usually interested in either renting an apartment or buying a home.

New Florida residents enjoy a homeownership deal that allows them to pay less than 1 percent as property taxes. Florida's rates are quite favorable compared to other states where residents pay over 2 percent property taxes.

The sunshine state's migration rates don't slow down anytime soon. Out of the 8.9 million people who changed their addresses at the onset of the pandemic, 28 percent of them moved to Florida. The state will have over 845 new residents every day for the next three years.

Why are People Moving to Florida?

Florida is always an attractive place to relocate to with affordable homes, a zero income tax policy, and warm weather. More people are considering moving to the state to enjoy all it offers. Here are some of the reasons behind the increased migration:

Residents of Florida never have to seek other vacation destinations since they have most of the attractions they need. All tourist attractions in the state are within a drivable distance. There is always something fun and exciting for everyone, from the Disney World theme parks to the secluded sandy beaches on the Gulf Coast.

It's relatively easy to get away if you want to travel to a vacation destination out of the state. Since the state lies on the east coast, you get to save flight hours when heading to Europe. Florida is also an excellent starting point for travels to South America, the Caribbean, and Mexico.

As the world's cruise capital, Florida is home to over 20 cruise lines, including Regent Seven Seas, Disney, and Royal Caribbean. Most of the seasons in the state are usually warm and mild. You'll never need a sweater in winter when resigning in the southern side of Florida.

If you're looking to save money on taxes, you may consider moving to Florida. Sunshine State is among the few states with a zero income tax policy. Though the tax authorities require you to pay property and sales taxes, the overall state tax load is much lighter than in other states.

You can save more of your money and use it for investments, vacations, or entertainment. Florida also imposes a lower state corporate tax of 5.5 percent and a sales tax of 6 percent.

Along with income, no tax is placed on intangible personal property (including shares), gifts, and inheritances. Residents enjoy a low tax burden by paying federal income taxes. To sustain state-funded activities and wages, Florida collects taxes on services and goods like communications services, tobacco products, and fuel that residents pay for.

Florida is home to culturally diverse people of different ages, religions, and backgrounds. The population comprises people born and raised in the states and individuals who moved from other states for the tax benefits, job opportunities, and weather.

With plenty of delectable dining options, the state has diverse foods and drinks for your taste buds. Fresh produce, including strawberries, avocados, watermelon, and oranges, are sourced from the state's thriving farms. You can also enjoy Caribbean-style and Island-inspired foods like coconut shrimp from Florida restaurants.

Florida's residents have an admirable laid-back lifestyle characterized by casual fashion. You're more likely to encounter residents donning t-shirts and flip-flops. If you enjoy chilling and living in the moment, the sunshine state has everything you need to achieve this desire.

The average person will need to earn $30,855 a year (before taxes) to have a livable wage in Florida. A single adult with one child would need a liveable wage of $64,317 a year, while two working adults with one child will need $69,747 a year. Food is quite affordable in Saint Petersburg,

The average cost of essential utilities is $128.12 in Miami, $183.18 in Tampa, and $185.73 in Orlando. Consider expenses like state park entry and parking fees, gym memberships, and entertainment costs when living in the state.

Depending on the area you plan to relocate to, it's easy to find affordable housing in Florida. The median listing home price is $249,900 and $279,000 in Tallahassee and Jacksonville. Expect to pay a higher amount when shopping for a home in coastal cities like Miami.

Since Florida records many migrants every year, bidding wars drive housing prices higher. You have a chance to find a residential property for way less than the country's median sales price, which stands at $408,100.

Dade city has to be the state's cheapest place to live, with a $122,600 median home price and $29,000 median income for the residents. It's an ideal commuter town for people working in the city.

With one of the country's largest GDPs, Florida has some of the large employers you'll ever find. Its GDP is even estimated to be equal to Mexico's. Top industries in the sunshine state include manufacturing, distribution, information technology, financial services, cleantech, and aviation.

Job hunting in the sunshine state is easier when you're aware of the current openings. Florida's labor force is expected to grow by 6.1 percent in one year to accommodate the ever-rising job demands. Businesses operating in the states also offered 11,900 jobs in a month, while the private sector employment rate increased by 6.2 percent.

Florida is also an excellent place to retire if your employment days are almost ending. The state has a zero income tax policy, but it also doesn't impose any taxes on retirement income (including Social Security benefits). Florida cities like Pensacola, Port St. Lucie, Fort Myers, Tampa, and Daytona Beach have highly suited for retirees, thanks to the friendly and tranquil neighborhoods.

Verify and calculate your home affordability

Florida Cities Most People are Moving to

Based on data drawn from the Census Bureau, Florida's metropolitan statistical areas were ranked based on the net migration years 2010 to 2018. Here's a breakdown of 6 metropolitan areas in Florida where most people relocated to:

Cost of Moving to Florida

The cost of moving to Florida includes the visits you may need to make before the final move and the actual move. It's important to calculate these expenses to get the most out of the process when planning the move. Below is a breakdown of the costs:

Visiting Florida in Search of a House

It takes a lot of planning to relocate to Florida successfully. You may visit the sunshine state several times to find an ideal place to live in. The to and from traveling costs tend to add up quickly, depending on the flight prices or fuel costs.

Always check the flights and fuel prices in your area as you plan the visits. Opt for days and times that are less popular with tourists to save traveling costs. For instance, if you're visiting Florida from New York City, expect to pay between $41 and $250 for a ticket.

Upon arriving in Florida, you must book an accommodation facility to make your stay comfortable. Hotel and accommodation prices vary widely from $68 a night to $118 a night. You should also have a budget for your meals and miscellaneous expenses.

Packing and moving personal belongings takes time, patience, and money. You have to find a moving company that can accommodate your moving needs and guarantees the safety of your belongings. Off-season moves are pretty affordable, unlike summer moves, which are costly and filled with delays.

A cross-country move to Florida will cost you $1,920 and $4,632 since long-distance moves are costly. The final moving costs will depend on the type of moving services and how far you are going.

If you own a vehicle, you have to decide whether to drive it or ship it. Though both options attract costs, it's cheaper to drive the car than to ship it. The shipping fees range from $700 to $1,400 per vehicle, depending on the location and size.

With its limitless attractions and culturally-diverse population, Florida never stops appealing to people looking for a fresh start. The sunshine state boasts a subtropical climate and favorable taxation policies that an average American may want to enjoy. It is also considered an ideal place for retirees with mild winters, affordable housing, and beautiful sandy beaches.

Knowing the number of people currently relocating to Florida can help you decide whether or not to move to the state. You also discover the Florida cities that appeal to homebuyers and renters. Good luck making your decision.

Why You Should Consider Moving to Ocala, Florida